Another interesting article to read. 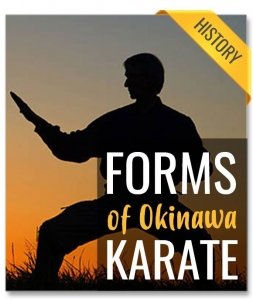 Katas are fighting choreographies carried on from father to son for generation. Hence, majority of practitioners today do not like to practice katas and tend to prefer free fights (sparing), because it seems that kata practice is not much applicable in real situations. However, in order to get master certificate in any karate style, you have to learn bunch of katas.

Old tradition – one kata, one style

Many historical sources testify that in past situation was completely different. Only few masters knew more than one or two katas. Why is this? Why today average practitioners know over 10 different katas?

Before 1900, karate was secret. Trainings were individual and tradition was passed only to family members or dedicated students who got a chance to practice with famous master. Karate was practiced exclusively among warrior class members – pechin. Back in that time, life was very cruel and karate was taken extremely seriously. In certain situations, it could mean life or death. Traditional okinawan karate was for self-defense only.

Famous master Gichin Funakoshi in his writings says that one kata is enough for self-defense. Kata usually contain few throws, few joint locks and bunch of punches, strikes and kicks, which are enough for effective use in real confrontation. Each kata is separate fighting tradition and therefore practicing several different katas means knowing more techniques, which anyway does not raise effectiveness in self-defense, but on a contrary. This is a reason, why in past one used to master only one or two katas.

In ancient times, teachers rarely accepted new students. You had to have very good recommendation and iron will to keep up with ruthless training. Master would teach you only one fighting tradition – one kata[1]. To become proficient in only one kata was very hard, but trying to learn several fighting traditions was almost impossible. Those who knew several katas, were usually high ranking okinawan officials, who had enough time to dedicate themselves to research of various fighting traditions and who had enough financial funds and possibilities to travel to China. Only few had this opportunity and most famous ones are Kanryo Higashionna, Bushi Mutsumura and Seisho Aragaki.

After 1900, a group of instructors feared that old karate traditions will be forgot and lost forever and decided to promote karate on Okinawa. Their goal was to include karate into regular school program and military practice. However, old karate was not suitable for children or for group training, so master Itosu modified karate, expelling all dangerous techniques and focusing on kata practice without revealing most of practical applications (bunkai). Karate was transformed from devastating self-defense method to mystical recreational activity. It was birth of modern karate – karatedo.

Master Itosu was author of this new kind of karate and he’s ideas were supported by many: Gichin Funakoshi (Shotokan), Kenwa Mabuni (Shito ryu), Chojun Miyagi (Goju ryu), etc. They were traveling around Ryukyu Islands demonstrating karate and at the same time, they attempted to learn as much new katas as they could from the old karate masters. This way they tried to save tradition from being forgotten. Since than, modern styles have many katas included in their curriculum. For example, shotokan preserve 26 katas and shito style even over 50.

Today, karate schools are focused on wining competitions, recreation and charging fees. Self-defense is not of primal importance. Instructors are promoting Hollywood type of karate, demonstrating several dozens of good-looking techniques per training. This flashy approach guarantees many new students, but this is not effective training for self-defense. Unfortunately, training like this produce “black belt” that knows 20 katas and hundreds of techniques, but is defeated on street, failing to resolve basic self-defense situations.

Word “kata” means “form”, “style” or “pattern”. Oral tradition says, “Karate is kata” and confirms that every kata is actually stand-alone fighting system. When I say this, I have in mind advanced forms that existed on Okinawa prior 1900.

Traditional karate training is focused on practicing of single advanced kata for several months or years. Each kata has its own kihon, basic techniques that should be practiced on makiwara. After that, one must try to execute and understand sequences found in kata. All movements have practical application (bunkai), which should be practiced with partner (kumite) reflecting realistic self-defense situations. Always bear in mind that kata is authentic fighting system.

Ready positions – kamaekata (pasai, kushanku, pinan, wanshu, naihanchi), if one kata represents one fighting style, then this could be salutation positions of various schools/traditions, as it is in China.

If every kata is fighting style for itself, then it is obviously ridiculous to learn 26 kata, because it is unnecessary accumulation of techniques. It is the same as when person would carry 26 guns. Only one gun is enough if you know how to use it.

We can conclude that techniques that look similar, in different katas, probably do not have same meaning because we are talking here about different fighting traditions. For example, it would be silly to think that shuto uchi in kata Pasai have same usage as shuto uchi in kata Kushanku. On the other side, it is possible that techniques appear different, but that they have similar application (bunkai). This is because all forms deals with habitual acts of violence and “there are many ways to climb up the mountain”.

I know that this, which I will try to bring out, will sound like sacrilege to many; however, theory of 1000 years long tradition of karate is just a myth. According to many historical researches, also taking into consideration solid evidence, written documents and oral tradition, we can state that old karate (tote) starts to appear in XVIII century on Okinawa. This new fighting is imported from Fukien (China) and flourishes in XIX century among warrior class (pechin). In XX, century karate is modernized and spread worldwide.

First written mentioning of karate is from beginning of XVIII century, when eminent scholar Teijunsoku (1663-1734) writes:” No matter how you may excel in the art of te, and in your scholastic endeavors, nothing is more important than your behavior and your humanity as observed in daily life.”

If we take into consideration the oldest oral tradition and written sources, we will see that it is about individuals who lived on the beginning of XVIII century. They were pechin (warrior class members – village militia, royal guards, tax collectors, etc.), who traveled to China to learn Chinese fighting methods in order to improve their ability to deal with their professional duties.  In those days, weapon techniques (kobudo) were more important, but gradually empty hand techniques became more popular. For example, famous Tode Sakugawa and Bushi Mutsumura, both, traveled to Satsuma and Fukien to learn weapon techniques. There are many weapon katas that still exist on Okinawa, which bear names of these two great teachers.

Before XVIII century, Okinawa nation was small and learning of fighting methods was privilege for pechin class only. Even if you were a pechin, that still did not guarantee that you will learn karate, maybe some basic weapon techniques. From this, we can see that we are dealing here with small group of people and that there is little possibility of existence of some great karate masters, before those known to us, that are not mentioned in folk tails or that do not exist in official written records. Therefore, overall, we are talking about 300 years of tradition. I am not saying that there were no other fighting methods on Okinawa previously, but this was not karate[2]. Karate was imported from China and its basic characteristic is that techniques are passed through forms (kata).  Karate is old as are the oldest kataon Okinawa.

Karate styles very differ and on first sight, it seems that they do not have anything in common. However, seisan kata seems to be most widespread form in karate. This kata is present in all styles – shorin, goju, uechi, ryueryu, toon, shito….  In modern karate (shotokan), this kata is renamed in hangetsu. There is much evidence suggesting that seisan is probably the oldest form in karate.

If we go a little bit in past, we will notice that seisan was present in both then existing traditions (shorin and shorei). Chotoku Kyan learned this kata as basic from famous Bushi Mutsumura (1809–1901, shorin ryu). Chojun Miyagi learned sanchin and seisan as basic forms from Kanryo Higashiona (1853-1915, shorei ryu).

Before learning any advanced katas, one must learn basics (correct body position (kamae), stepping, breathing, muscle contraction and simple techniques). Both forms seisan and sanchin are good for beginners. Sanchin (“three steps”) is the simplest form of all (step in – assume guard – punch). In fact, this kata is beginning of seisan kata (“13 steps”). Seisan is consisted of basic kicks, punching sequences and body shifting. It represents firm foundation for advanced katas.

Many okinawan karate katas are also present in China. During time these katas were modified and it is often case that it is impossible to compare them today. However, the names remain.

Of course, it is not simple, as it seems. Some karate forms cannot be found in China and only exist on Okinawa. This is the case with kushanku, chinto and wanshu forms. There are evidences showing, that these forms are not modern day inventions.

Maybe, these katas still exist in China, but under different name. Maybe, okinawans never learned original name of style/form and named kata out of respect to their teacher? Maybe, Chinese teachers never taught a form, but only techniques, so after that okinawans created katas to remember all techniques. It is also possible that original Chinese form is lost long ago.

We do not have answers to these questions, but tradition says that these katas got names after chuan fa masters who came from China and taught okinawans.

Many katas that are considered traditional are in fact modern day inventions. These forms are not of Chinese origin, but are created by okinawans, after 1900. I will mention just some of them:

Some of these katas are invented to make practice easier to beginners (taikyoku, pinan…), while others came up as a result of someone’s life long research (sunsu, ananku…). For example, Kenwa Mabuni created kata shimpa in order to keep knowledge he got from sensei Uechi. Who knows, maybe similar once happened with kata kushanku, chinto or wanshu

Question arises, why would famous karate masters, like Itosu, Mabuni or Miyagi, create new kata? Were traditional forms not enough? There is much evidence on this subject in kobudo also.

At the end, we see that karate was imported from China, three hundred years ago and that in those days one kata represented one style. Then, after 1900, okinawans invented whole bunch of new katas.  So, where is a point in this? At first sight, it seems that okinawans are responsible for ruining their own heritage. This is not true, because before they even thought to create new kata and to give personal interpretation, they perfectly researched existing style/tradition. Point is that you should first understand old forms, before proceeding with giving any shape to your own karate, which can be different depending on personal goals – self-defense, sport, recreation.

To search for the old is to understand the new.
(Gichin Funakoshi).

[1] We talk about advanced katas. This does not include beginners katas as sanchin, seisan, etc.
[2] Motobu family fighting system (udundi) is very old. However, this tradition is very different from karate and has no forms (kata). This style is not imported from China, it is more likely to be of Okinawan or Japanese origin.
[3] Unfortunately old style Naihanchi kata is lost; today Naihanchi is modified Itosu’s version.